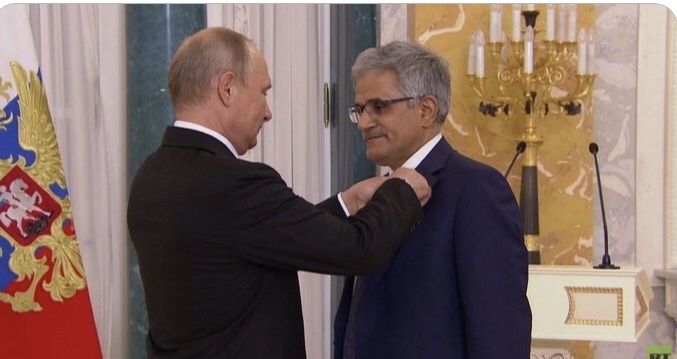 Mahmood H. Alkooheji, Chief Executive Officer of Bahrain Mumtalakat Holding Company (Mumtalakat), the sovereign wealth fund of the Kingdom of Bahrain, was awarded today the Order of Friendship by the President of Russia, Vladimir Putin, making him the first Bahraini to receive this award. The award ceremony took place at Konstantinovsky Palace on the sidelines of the St. Petersburg International Economic Forum (SPIEF).

The Order of Friendship is a Russian award established in 1994 by Presidential Decree 442 to reward foreign citizens whose efforts are outstanding in strengthening relationships with the Russian Federation and its people. Over 350 recipients have been awarded the Order of Friendship since then.

Alkooheji received the award in recognition of his efforts in leading Mumtalakat’s partnership with the Russian Direct Investment Fund (RDIF), first embarked upon in 2014, through which the company launched a co-investment programme and committed to invest in promising companies with attractive returns across an array of growth sectors over a 5-year period. RDIF was established in 2011 under the leadership of the President and Prime Minister of Russia as part of the government’s economic plans to revitalise the Russian economy and increase co-investments and long-term strategic partnerships with sovereign wealth funds.

Reflecting on this recognition, Mahmood H. Alkooheji commented, “It is an honour to be recognised by the President of Russia, Vladimir Putin, and to receive the Order of Friendship award. Bahrain and Russia enjoy strong bilateral ties and the Russian economy is promising which is why we have established a partnership with RDIF. This partnership is aligned with Mumtalakat’s mandate as a long term investor interested in international diversification in companies with proven track records of growth and profitability. Ranked 35th globally by the World Bank for ease of doing business, we see a trajectory of stable GDP growth in Russia maintained at 1.8% this year, and which we expect to rise.”

During the SPIEF, Alkooheji will be speaking in a panel entitled “Banking and finance in emerging markets.” The forum, an annual event, is held this year from 24th to 26th May 2018. Focused on business and economics, SPIEF was established as a global platform for members of the business community to meet and discuss the key economic issues facing Russia, emerging markets and the world. The forum, which brings together approximately 10,000 industry leaders and government officials from across the world, will also be attended by French President Emmanuel Macron, Japanese Prime Minister Shinzo Abe and IMF Managing Director, Christine Lagarde this year.