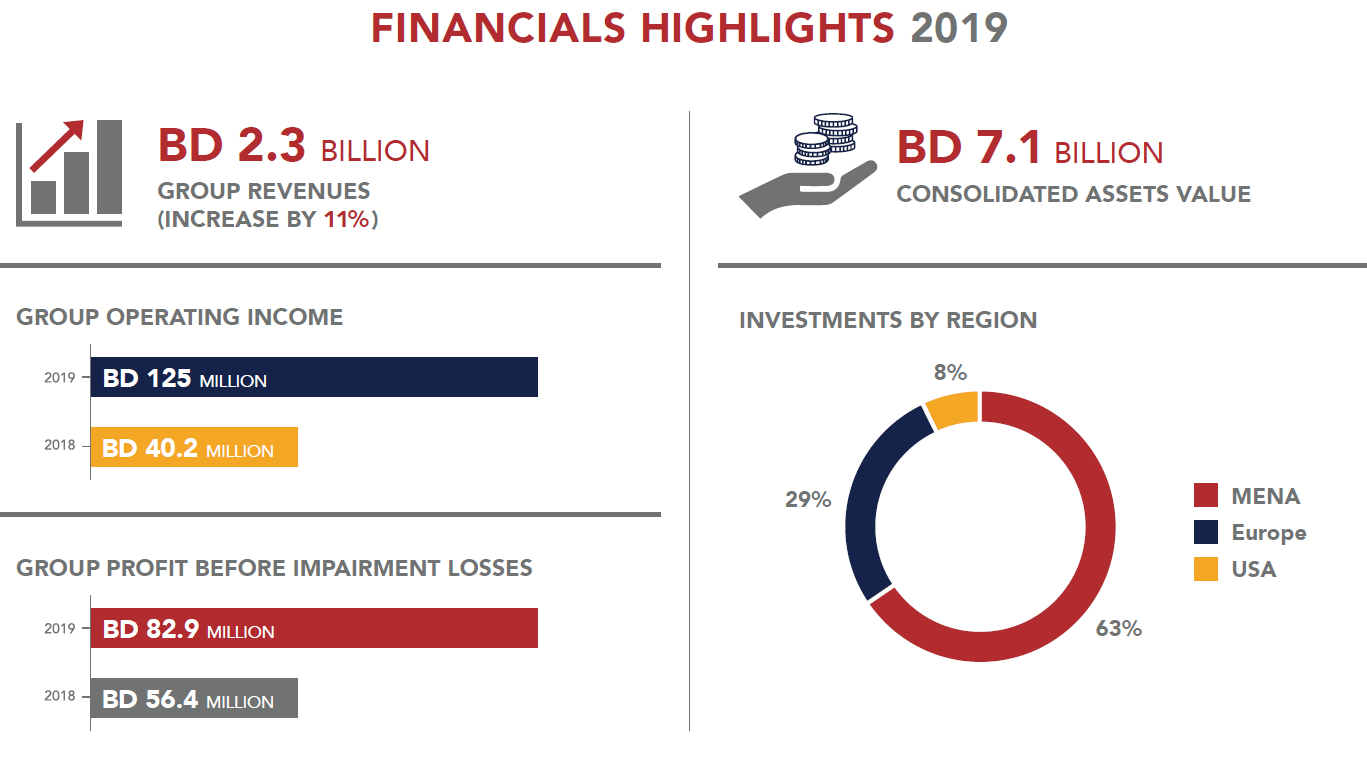 Bahrain Mumtalakat Holding Company (“Mumtalakat”), the sovereign wealth fund of the Kingdom of Bahrain, today announced its consolidated financial results for the year ended 31st December 2019. The results reflect another year of solid financial and operational performance across the Mumtalakat group (“Group”).

Despite a challenging year in the commodities market, Aluminium Bahrain “Alba” reported positive results for the year 2019, with revenue increasing by 13% and sales volume by 33%. Alba also inaugurated its Line 6 Expansion Project boosting Alba’s per-annum production to become the world’s largest smelter ex-China.

Mumtalakat completed a number of transactions in 2019 including investing in Grupo Premo (Premo), the leading Spanish manufacturer and distributor in the electromagnetic inductive components field which is used in automotive, telecommunications and electronics industries, and Bahrain based Elm education platform (Elm), a fund dedicated to developing the education sector in Bahrain and the wider Middle East and North Africa region whose investments include the American University of Bahrain which opened its doors to the public in September 2019.

Commenting on the financial results, HE Shaikh Khalid bin Abdulla Al Khalifa, Deputy Prime Minister, Chairman of Mumtalakat said, “Despite the challenging global and regional economic environment, Mumtalakat has exhibited resilience and growth as it continues to play a vital role in the local economy supported by the Group’s solid financial and operational performance.”

HE Khalid Al Rumaihi, Mumtalakat CEO, said, “During 2019 Mumtalakat secured new investments and continued to work with its portfolio companies to focus on revenue enhancement and cost control which has contributed to a significant increase in operating income. This is in line with Mumtalakat’s ongoing efforts to maintain a balanced, diversified and sustainable portfolio.”

The Group net result showed a loss of BD 52.8 million [USD 140.4 million] in 2019 which was primarily due to non-cash impairment losses, recognised on goodwill relating to Alba, amounting to BD 135.7 million [USD 360.9 million]. These losses, while impacting the group net results for 2019 do not represent a cash loss but rather represent a reduction in the value of goodwill on Mumtalakat’s books of accounts.

2019 was a challenging year in the commodities market which has weakened global aluminium price outlook. This has resulted in Mumtalakat recording impairment losses on goodwill related to Alba in the amount of BD 135.7 million [USD 360.9 million]. Upholding our principles of prudence and transparency, Mumtalakat took the non-cash impairment on goodwill to reflect current market conditions affecting the industry.

Since its establishment in 2006, Mumtalakat’s portfolio has grown from 29 companies mainly in Bahrain to over 60 companies across various markets.