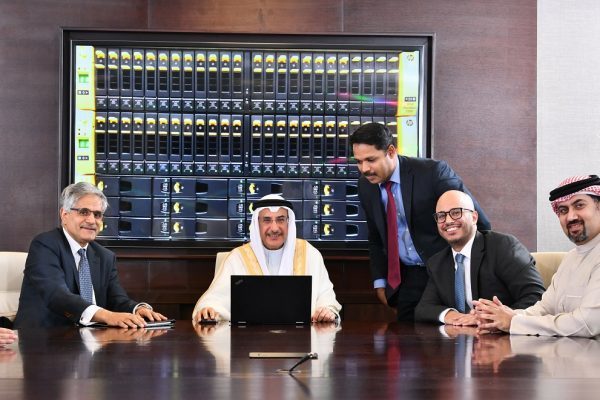 HE Shaikh Khalid bin Abdulla Al Khalifa, Deputy Prime Minister and Chairman of Bahrain Mumtalakat Holding Company (Mumtalakat), the sovereign wealth fund of the Kingdom of Bahrain, today oversaw the successful migration of the company’s IT infrastructure to the Amazon Web Services (AWS) cloud and the closure of its onsite and offsite data centres. Mumtalakat is the first government-owned company in Bahrain to fully migrate all its technology infrastructure as part of its digitization plans and in line with the Government of Bahrain’s Cloud First Policy. The company also aims to lead by example in using cloud computing services in order to reduce costs and increase security and productivity.

The migration to the AWS cloud is expected to lead to a reduction in Mumtalakat costs by more than 50% as data backup, storage and security costs are cut. The migration allows the company to run its servers anywhere in the world, significantly reducing the need to maintain and upgrade hardware and providing a variety of improved security products at a lower cost while increasing productivity.

AWS announced plans for the first Middle East infrastructure Region in the Kingdom in September 2017, which will consist of 3 Availability Zones once launched in early 2019 and will give AWS customers and partners across the region the ability to run their workloads and store their data in the Middle East with lower latency.

Commenting on this, Mahmood H. Alkooheji, Chief Executive Officer of Mumtalakat said, “We are proud to be the first company in Bahrain to migrate our entire IT infrastructure from legacy systems to the cloud-based offering of AWS. Increased operational efficiency and security are integral components of our digital strategy. This would not have been possible without the active support of HE Shaikh Khalid bin Abdulla Al Khalifa whose guidance has led Mumtalakat’s partnership with AWS as our cloud provider. AWS was the best choice in this venture due to the wide breadth of their services.”

With a diverse portfolio of companies, Mumtalakat has been encouraging its Bahrain-based subsidiaries as well as other local portfolio companies to migrate their digital infrastructure to cloud-based solutions. A workshop spearheaded by Mumtalakat and entitled Cybersecurity & Cloud Computing was held in January with speakers from iGA, AWS, Batelco and Tamkeen (Bahrain’s labour fund) and participants from 15 local companies within Mumtalakat’s portfolio discussed the services associated with a move to cloud.

According to AWS, companies report an improvement of 30%-50% in workforce productivity in organisations following their migration to cloud services. Today, AWS provides 55 Availability Zones within 18 geographic infrastructure regions worldwide.

AWS has a wide range of customers in the region and across the globe including Al Tayer Group, Careem, Anghami, Capital One, Samsung, Netflix, Adobe, Johnson & Johnson, Shell, GE and Phillips.